Less than 300nm to the finish line in Les Sables, but it’s not plain sailing for team Imerys, Phil reports on a heart pounding wake-up call:

“Early this morning we had a big incident with our largest spinnaker.

“Sailing downwind there was a loud bang at the top of the mast. Suddenly the entire sail fell into the water and begin to drag alongside the boat. I shouted to Adrien who was asleep at the time and in a flash he was up on deck already starting to haul the spinnaker out of the water.

“We managed to stop the boat, sail backwards and then tack in order that it didn’t tangle with the rudders or keel and instead floated out freely on one side. We miraculously managed to then drag the spinnaker back on board with no damage, a massive relief, but at the same time we found the cause – the webbing at the top of the sail had failed, so we can no longer use it (photo).

“Promptly, we hoisted the smaller fractional spinnaker and are now making good speed with stronger winds (luckily for now), ahead of our new mission to recover the miles lost during the incident…

“Aside from the drama and disappointment – we are having some really fun downwind sailing, riding this cold front (bad weather) all the way to our arrival in Les Sables! We hope to be finishing just after midnight UTC. Although Aina looks unstoppable, Tales II is not far ahead so there is still a chance of closing in on them before the finish. It’s sailing, anything can happen…”

{PHOTOS ATTACHED: recovered spinnaker safely below, and broken webbing at head of sail} 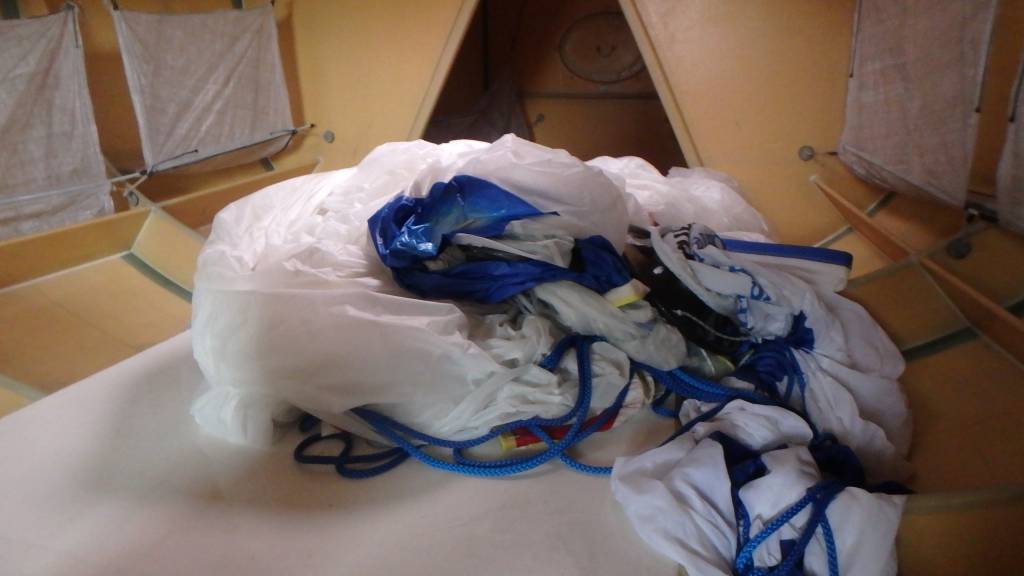